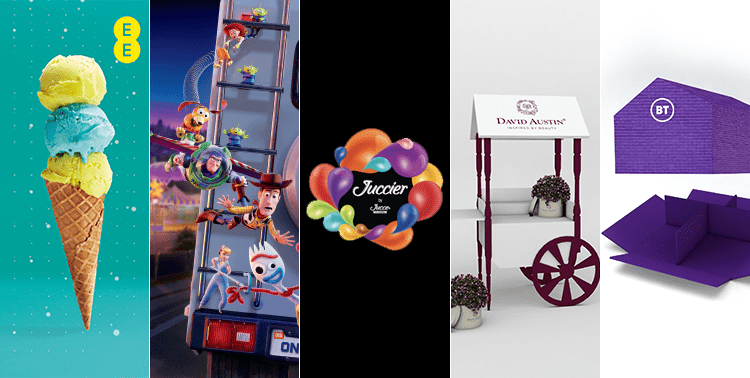 As we enter the last full working week of 2019 we’re taking a look back at some of our favourite projects over the last 12 months.

For this year’s EE triple data summer promo went big. Big on the ice cream. From concept, photo shoot to artwork – we created the lot and loved every second of it. Especially testing out which flavour and colour worked best.

Many calories were consumed in the making of this campaign.

Recently we won a pitch to work with David Austin Roses marketing team going forward. This was a very pretty pitch to work (as you’d imagine) on and one we were overjoyed to win towards the end of 2019.

The team are very much looking forward to working with the team at David Austin Roses throughout 2020 and beyond.

As the only car and van rental brand to collaborate with Disney and Pixar on Toy Story 4, Europcar’s campaign in the UK was designed to increase brand awareness amongst summer travellers.

This year we entered the world of vaping with a calendar full of events for our client Juccier. We conceptualised, designed, printed and built the show stands across Europe. The events team traveled the length and breadth of the UK as well as Germany, Spain and Italy throughout the year racking up over 17,000 miles in the process.

To coincide with the huge BT rebrand we helped support the home broadband ‘walk in working’ campaign to new developers. We conceptualised, designed and artworked a home builders launch pack to be sent out to the likes of Barratt Homes and Lovell.

We also created a bespoke landing page that allowed new developers to order BT home broadband POS for their show homes and learn more about the BT ‘walk in working’ promise.

Show us your brief.

And we’ll show you what we can do.

We use cookies to ensure that we give you the best experience on our website. If you continue to use this site we will assume that you are happy with it.AcceptPrivacy Policy