Back to case studies

We have been working with EE, the UK’s best network, since it was known as Cable and Wireless back in the early 90s. We’ve also been working with the Indirect, or Channel Partnerships team, for a number of years as well as many of their partners (Carphone Warehouse, Dixons, Argos, Sainsbury’s etc.) So we have a good idea of what the brand needs and what the Channel Partnership Teams challenges are in those busy retail spaces.

So, when we were approached by EE to develop a summer campaign for the latest Pay As You Go (PAYG) data promotion, we were eager to get our creative teeth stuck into the brief.

Where did we start?

Simply put, EE was giving away free data as part of the summer promotion. Double data for £10 top ups. And triple data for £15 top ups.

That was our brief to the creative team – how to articulate the doubling and tripling of PAYG data allowances this summer in a simple, impactful message and accompanying creative that would cut through in busy retail environments.

How did we come up with the ‘big idea’?

Our creative team worked up a bunch of rough concepts to present to the client.

[Include reference imagery to concepts not chosen – https://drive.google.com/drive/folders/1bajRPDuMDA_ZyEhGeoh50E1s3VzZ2eEp]

The idea selected was our double and triple scoop of ice cream concept. The client felt that this was the most impactful for a summer campaign and would be easily digested and understood by a consumer in a busy retail store.

The only challenge now – how to bring the idea to life?

How did we develop the campaign?

Initially we wanted to create the image using Adobe Photoshop, but we and the EE brand team soon realised the only way for this visual to be as impactful as possible was to shoot it for real.

Only issue; the deadline was a week away. No matter. We’re used to that!

Luckily our friends at Red Frost Photography had a slot available the following week and we were promptly booked in after a Friday evening call with the client. 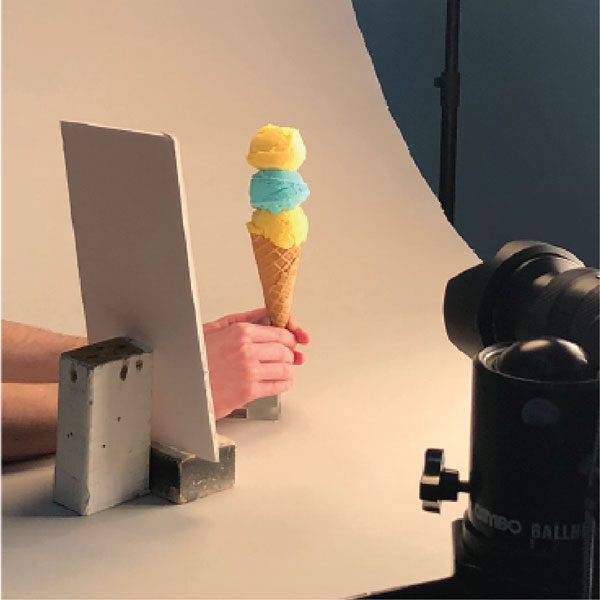 Given the short timeframe and budget we were operating within there was no food economist or food stylist available, so it was left to our Project Management and Studio Teams to source all of the shoot materials, including copious amounts of ice cream, and manage the shoot and post-production.

The cone and ice cream were shot separately and edited together in post-production. Both double and triple executions were shot at the same time on Wednesday and the final images were approved by the end of the same week. And believe or not, the ice cream colour was not retouched and was pretty much on brand straight out of the tub. Result!

What were the results?

We rolled the campaign out across all of the various touch points the Channel Partnerships team needed. In store point of sale (POS) for various retailers, digital screens, signage as well as web and social assets.

So impressed were the EE brand team with the creative that the campaign, which was only originally earmarked for partner stores such as Argos and Sainsbury’s, was rolled out across all EE retail stores and the EE website.

The commercial team were also thrilled to see a 12% uplift in PAYG sales over the three month period the campaign ran for when compared to the previous year.

"Citizen were provided with a challenging brief to increase EE PAYG acquisition in a declining market. Having worked with the agency for several years, I knew they would be able to quickly understand the complex nuances of Indirect distribution and the multitude of different customer touch points.

I have been very pleased with Citizen’s standard of work on this project and countless others. I wouldn’t hesitate to recommend Citizen to anyone in need of marketing and design support, whether for a strategic multi-channel campaign or a small artwork job. The EE team and I are very impressed with the results and now look forward to working with the Citizen team on future EE and BT projects."
- Lauren Horton, Communications Manager, EE