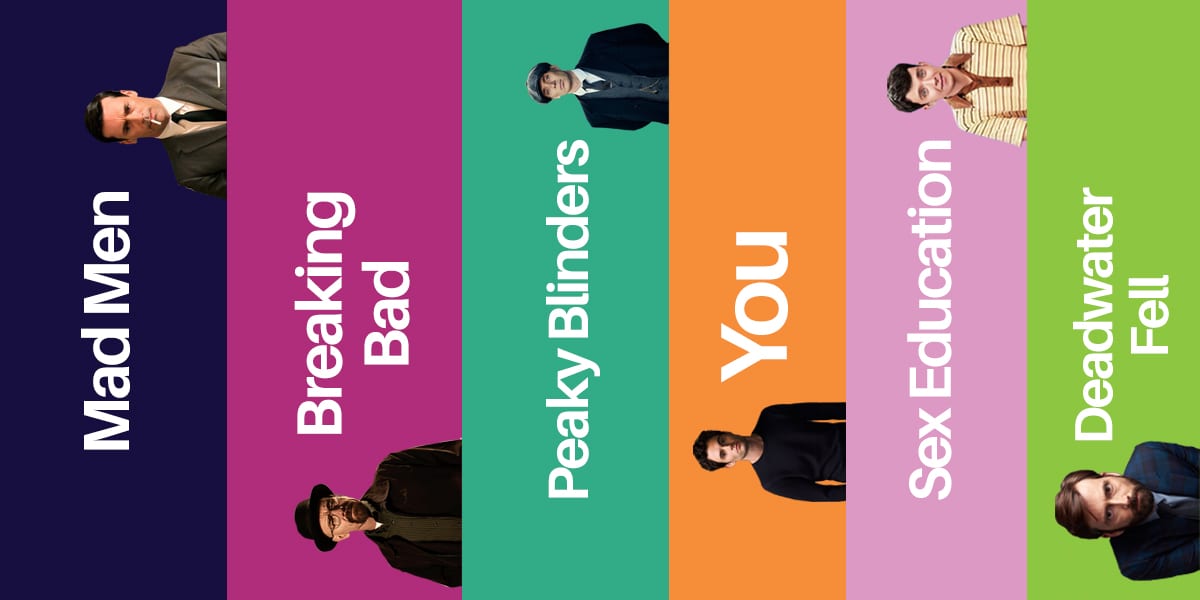 It’s that time of year where all you want to do is curl up on the sofa with a greasy takeaway and watch your go-to series or to binge on an old favourite. We do have a-few* Netflix/Box Set fans in the office, so hopefully this month's Blog will help you avoid any mediocre ones and find the best things to watch. You’re welcome.

Available on Netflix and BBC iPlayer

The first I heard of Peaky Blinders was around 2 years ago (I know, you’re probably thinking ‘where has she been’?) but as I wasn’t the dedicated Netflix fan that I am now, I didn’t even know it existed. But one Sunday, I was bored and thought ‘I’ll give the first episode a go’. To my ignorance, I watched about 15 minutes of it and ditched it. I thought ‘what a load of rubbish – a Brummie on a horse in the middle of nowhere?’ What’s all the fuss about? Until the newest season (5) got released on the BBC in the Summer last year – our Black Country boys, Sam and Jack were banging on about how amazing it is. I said I would give it another chance, but to be honest, I was ready to be disappointed once again.

How wrong was I…

From that moment, I watched seasons 1-5 in approx. 2 weeks – I will admit that there were many late nights and takeaways consumed during this time, but it was totally worth it. I’ve also come to the fact that Tommy Shelby (the main protagonist) and I will never get married… but in all honesty, I was absolutely blown away by the series; each episode got better and better (including Polly’s Birmingham accent).

So if you’re up for a Drama/Crime/Historical Fiction/Thriller to sink your teeth into this Winter, I would 100% recommend it. And while the next series isn’t due until early 2021, it’s still well worth your undivided attention.

This is simply the greatest TV show of all time, end of. If you haven’t seen this incredible story unfold yet – what the hell have you been doing the past few years.

Bryan Cranston plays Walter White, an average joe high school chemistry teacher diagnosed with terminal cancer. In order to leave his family is a better position financially he teams up with a meth dealing ex student of his (Aaron Paul) and uses his chemistry wizardry to manufacture the best methamphetamine in the US (as you do).

Over the course of the shows five seasons creator Vince Gilligan and Cranston (yes Malcolm’s goofy dad from Malcolm in the Middle) chart this average joe’s descent into a modern day Scarface. Yet they do it in such a way you hardly notice as he edges his way further and further into dark moral territory, ultimately transforming into his alter ego ‘Heisenberg’. What’s worse, as the viewer, I found myself on his side with most of the terrible things he does (almost) until the very end, because he’s doing it all for his family right?

Never have I actually got up and screamed at my TV before, but Season 5, Episode 14  ‘Ozymandias’ did exactly that to me.

Stop what you’re doing and get started*.

*Season 1 is slow, but only seven episodes long so power through that because season 2-5 are incredible.

With only 8 episodes in series 1, the time flies by and I found myself having watched the whole thing in one sitting, on a Sunday, of course. The instinctive urge to be nosey into other people’s relationships keeps you pressing ‘next episode’, coupled with the fact that it’s hilariously honest. You can probably guess what it’s about – the birds and the bees – however it goes into deeper issues to give a fresh but also realistic perspective. It shows the trials and tribulations of being a teenager at school, however combines the fact that the main character’s mum is a sex therapist…awkward. Get ready for some cringy situations.

The only thing that confuses me about this programme is the time period. Wacky, colourful clothing, soundtrack choices and references makes you assume it’s set in the 80’s, but with mentions of Ed Sheeran and usage of iPhones- who knows?! I’ll let you be the judge of that, but you can’t deny it’s very aesthetically pleasing.

So if you want a fun, easy and funny show that will leave you wanting more, then ‘get your good shirts on boys. It’s party time’ – Maeve Wiley, Sex Education, Season 1: Episode 2.

Ok, it’s not quite a box set – more like a mini-series for those who ‘don’t have time to sit in front of the TV mindlessly’…

Channel 4 released a new series starring David Tennant, a forensic doctor who becomes a prime suspect of a triple homicide. After the first episode, you’re left confused with a cloud of suspicion. Who did it? How did it happen? Was it even a murder? And without giving too much away, it packs an emotional punch. If you like mind-games and frustratingly scratching your head-type series, then you’ll love Deadwater Fell.

If you were sitting in your dressing gown doing bugger all on Boxing Day, you probably would’ve watched the second season of You.

But to re-cap, the first season came out late 2018, leaving Netflix fans hooked and probably terrified. I couldn’t quite believe a normal, nice, intelligent guy could be capable of doing such strange and obsessive things. And when I heard season 2 came out, I was expecting nothing less – and wow, it did not disappoint. The dark thriller was a binge-watchers dream thanks to a madly addictive plot that made me mouth ‘WTF’ each episode. But despite his controlling and psychopathic behaviours, you’re left feeling sorry for him, not because of his murderous actions (funnily enough), but because he genuinely wants to forget about all of his wrong-doings and live a ‘relatively’ normal and happy life – but it just can’t seem to escape him. Poor sod.

Sure, I can already hear you shouting through the screen, you’re not interested in advertising. But Mad Men has so much more to offer than the history of your favourite brands.

I’ve never quite seen a show that evolves so much, so accurately to the time period that it’s set in, while also maintaining a strong coherent focus on such a specific profession that is unknown to so many. We get a glimpse into a period of time littered with change, whether that be rise of feminism and the uncomfortable feelings of misogyny in the workplace, or how we see the divide of race slowly disappear through the younger generation of employees.

We follow the main protagonist, Don Draper as he balances his day to day work, family and past lives. The Man of an idealistic American Household, who has everything but happiness. Enter alcoholism, adultery and deception, yet his pain is so raw, we almost can’t blame him for his actions. But although the focus is on his life, we also follow the lives of so many complex and varied characters, really showcasing the social and political differences of different people in those times, and the respective challenges that they face.

Naturally as a designer I have a particular interest in the creative that we see in the show, as I love to see how some of the worlds greatest campaigns were thought up and the impact that they had upon their audiences. The beauty of Mad Men is that we see familiar brands and campaigns, but see the creative genius of a fictional character.

If you’re the type of person who loves delving into the complex lives of others, while witnessing some of the most iconic events of mid century Americana and the world, then be prepared to be more addicted to Mad Men than a mid level account executive is to his pack of Lucky Strike cigarettes.

Show us your brief.

And we’ll show you what we can do.

We use cookies to ensure that we give you the best experience on our website. If you continue to use this site we will assume that you are happy with it.AcceptPrivacy Policy